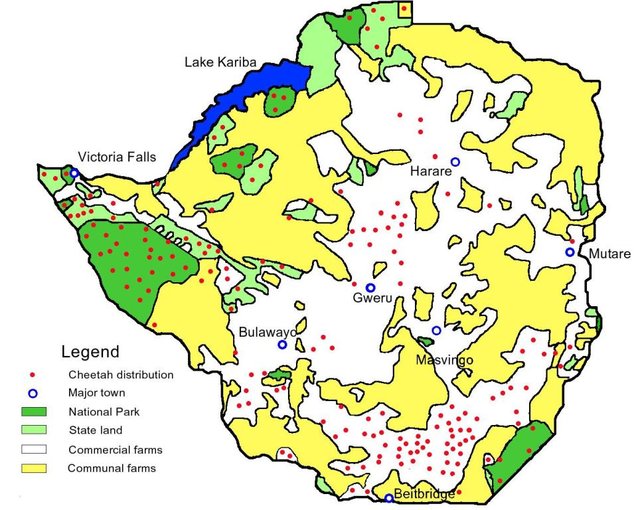 Prior to 2000 Zimbabwe was hailed as a conservation success story, with large areas of commercial (private) land outside of national parks being used to support wildlife. In 2000, however, a Fast-Track Land Reform Programme (FTLRP) was initiated, resulting in the resettlement of most commercial land. This had well known socio-economic impacts, but to date little research has been conducted on the effects on wildlife and human-wildlife conflict. This study aimed to determine the impact of the FTLRP on the conservation of large carnivores and on human-carnivore conflict, focussing on the cheetah (Acinonyx jubatus). A case study compared three land use types (LUTs)- commercial (Savé Valley Conservancy private wildlife reserve); resettlement (area of the conservancy that had been resettled); and neighbouring communal land. Spoor density of large carnivores was on average 98% lower in the resettlement LUT than the commercial LUT, while sighting reports and historical written records showed that the abundance of large carnivores had declined since the onset of the FTLRP. Aerial census data demonstrated a reduction in carnivore carrying capacity in both the commercial and resettlement areas. Habitat loss and fragmentation, alongside poaching, appeared to be the main mechanisms affecting changes in carnivore abundance. Interviews revealed that in the resettlement LUT, rates of livestock losses to large carnivores were perceived to be greater than in the communal LUT, and attitudes towards carnivores were more negative than the commercial LUT. It appears that the FTLRP had a significant negative impact on wildlife conservation and human-carnivore conflict, and is estimated to have driven a 70% decline in Zimbabwe’s cheetah population. It is recommended that future resettlement is carefully planned to mitigate these problems, and that schemes are established to allow communities to benefit from wildlife while minimising the impact of resettlement on human-wildlife conflict.