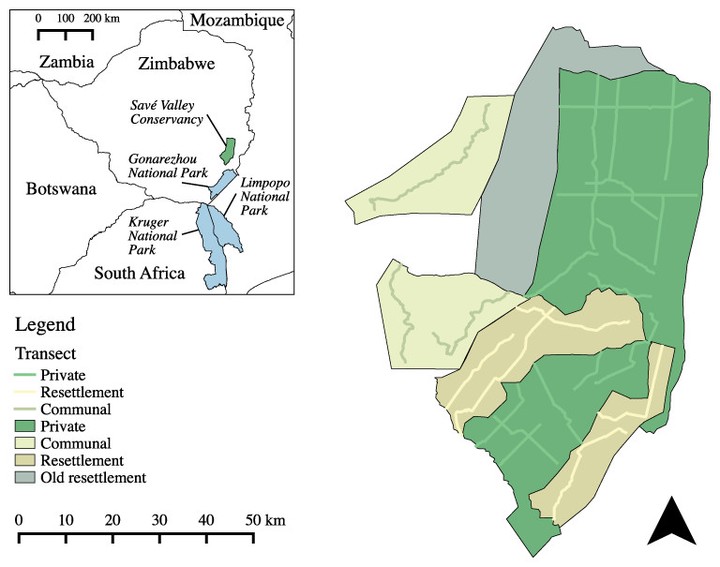 Large carnivores are decreasing in number due to growing pressure from an expanding human population. It is increasingly recognised that state-protected conservation areas are unlikely to be sufficient to protect viable populations of large carnivores, and that private land will be central to conservation efforts. In 2000, a fast-track land reform programme (FTLRP) was initiated in Zimbabwe, ostensibly to redress the racial imbalance in land ownership, but which also had the potential to break up large areas of carnivore habitat on private land. To date, research has focused on the impact of the FTLRP process on the different human communities, while impacts on wildlife have been overlooked. Here we provide the first systematic assessment of the impact of the FTLRP on the status of large carnivores. Spoor counts were conducted across private, resettled and communal land use types in order to estimate the abundance of large carnivores, and to determine how this had been affected by land reform. The density of carnivore spoor differed significantly between land use types, and was lower on resettlement land than on private land, suggesting that the resettlement process has resulted in a substantial decline in carnivore abundance. Habitat loss and high levels of poaching in and around resettlement areas are the most likely causes. The FTLRP resulted in the large-scale conversion of land that was used sustainably and productively for wildlife into unsustainable, unproductive agricultural land uses. We recommended that models of land reform should consider the type of land available, that existing expertise in land management should be retained where possible, and that resettlement programmes should be carefully planned in order to minimise the impacts on wildlife and on people.