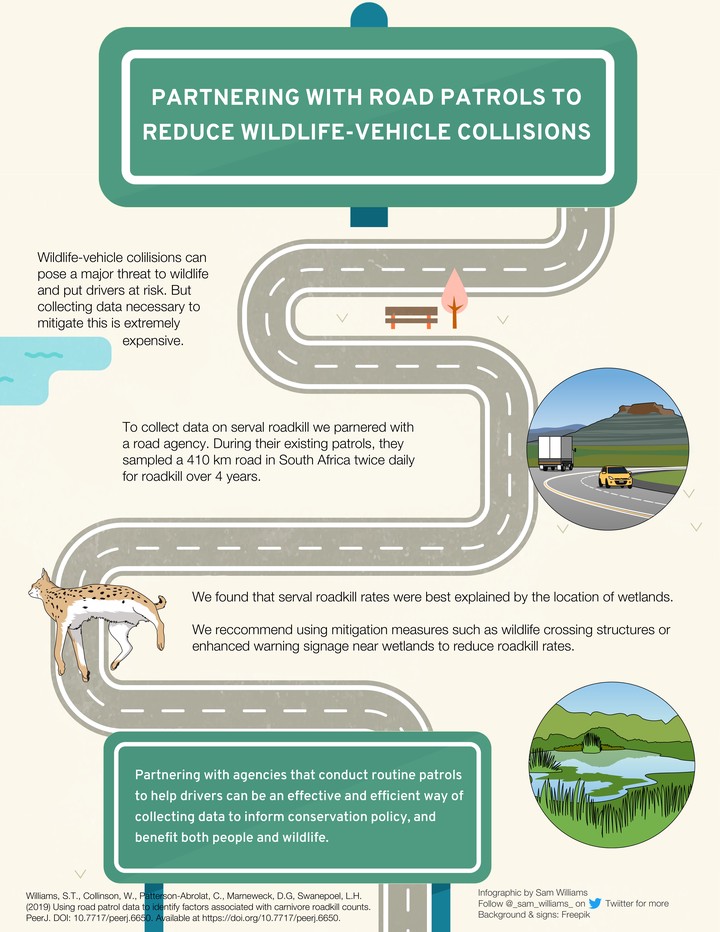 As the global road network expands, roads pose an emerging threat to wildlife populations. One way in which roads can affect wildlife is wildlife-vehicle collisions, which can be a significant cause of mortality through roadkill. In order to successfully mitigate these problems, it is vital to understand the factors that can explain the distribution of roadkill. Collecting the data required to enable this can be expensive and time consuming, but there is significant potential in partnering with organisations that conduct existing road patrols to obtain the necessary data. We assessed the feasibility of using roadkill data collected daily between 2014 and 2017 by road patrol staff from a private road agency on a 410 km length of the N3 road in South Africa. We modelled the relationship between a set of environmental and anthropogenic variables on the number of roadkill carcasses, using serval (Leptailurus serval) as a model species. We recorded 5.24 serval roadkill carcasses/100 km/year. The number of carcasses was related to season, the amount of wetland, and NDVI, but was not related to any of the anthropogenic variables we included. This suggests that roadkill patterns may differ greatly depending on the ecology of species of interest, but targeting mitigation measures where roads pass through wetlands may help to reduce serval roadkill. Partnering with road agencies for data collection offers powerful opportunities to identify factors related to roadkill distribution and reduce the threats posed by roads to wildlife.