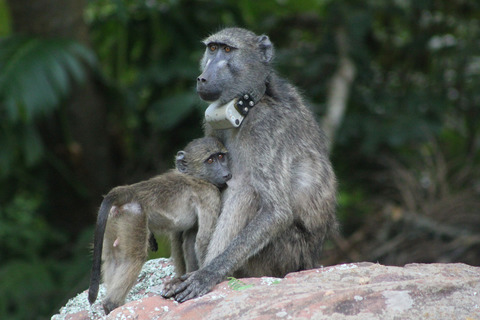 Recent analyses have shown that typically diurnal primates may periodically exhibit some levels of activity at night. Despite this, there have been few studies that have explored whether diurnal primates living in temperate environments will extend their activity budgets to the nocturnal phase as a response to seasonal constraints. Using dual-axis accelerometers, we explored whether chacma baboons (Papio ursinus, N=3) in the western Soutpansberg Mountains, South Africa, responded to seasonally fluctuating levels of day length, lunar illumination, wind speed, precipitation and temperature by heightening or lowering nocturnal activity levels. Our results showed that chacma baboons engaged in low levels of activity at night throughout the year. Although baboons had heighted nocturnal activity as a response to shorter days, moonlit nights and lower temperatures, these responses were most likely due to disturbed sleeping patterns rather than more active movement. Nocturnal activity significantly dropped in a female baboon throughout the course of her pregnancy and remained low after giving birth suggesting that females with infants must increase resting. Our results compliment previous analyses which suggest that although diurnal primates may periodically be active at night, there is limited evidence for strategic use of the nocturnal phase even in highly seasonal environments.