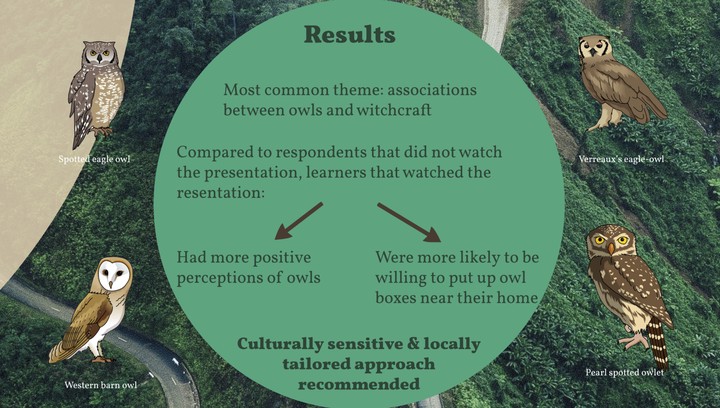 Traditional cultural beliefs influence perceptions of animals, and in some cases can result in persecution of wildlife. Stigmas against species associated with witchcraft, for example, can act as a barrier to the uptake of more cost effective, sustainable, and environmentally sound practices such as reducing crop damage by controlling rodent agricultural pests by relying on indigenous predators rather than pesticides. One way of enhancing perceptions of wildlife to increase participation in such ecologically-based rodent management (EBRM) schemes, is the development of environmental education initiatives. Low intensity programmes are cost-effective and can produce positive attitudinal shifts, but their impact has not been assessed for species strongly associated with witchcraft. We set out to test whether a single presentation on the natural history of owls (order Strigiformes) could improve perceptions of these species, and increase willingness to participate in an EBRM scheme that involved the installation of owl boxes to increase owl populations and reduce rodent populations and crop damage in agricultural fields. We used a questionnaire survey to assess perceptions of owls at four schools in two villages in South Africa. Our initial survey sampled perceptions of respondents before listening to the presentation. A follow-up survey conducted three months later sampled the perceptions of respondents that had listened to the presentation as well as perceptions of a control group that did not listen to the presentation. We found that associations between owls and witchcraft was a common theme driving negative perceptions of owls. Respondents that watched the presentation had more positive perceptions of owls than respondents that had not watched the presentation, and they were more likely to be willing to put up owl boxes near their home. Despite this shift, negative perceptions of owls still dominated responses due to cultural associations with the occult. These findings indicate that even low-intensity programmes can be effective at enhancing perceptions of wildlife associated with witchcraft. We suggest that environmental education programmes featuring culturally taboo species should adopt a culturally sensitive and locally tailored approach, focus on the benefits these species provide, and may be more effective when delivered with greater intensity.